Tune Therapeutics launches with $40M in funding, aims to fine-tune activity of genes in cells

Jack Dorsey’s Square is changing its name to Block 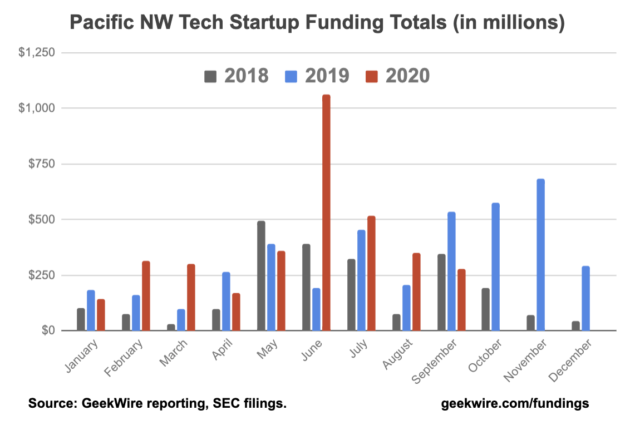 Startups in Seattle and across the Pacific Northwest continue raising gobs of money even amid an ongoing economic and health crisis.

The investment activity follows a strong first half of 2020 for Seattle and the broader Pacific Northwest startup ecosystem.

Clearly, investors are happily writing checks despite a global pandemic that doesn’t appear to be ending anytime soon.

“This is an incredibly exciting time to be an early-stage investor, with a wealth of opportunities at our fingertips,” said Brianna McDonald, president of the Keiretsu Forum Northwest investment network.

McDonald said the pandemic has reinforced the value of technology now more than ever.

“The need for innovation and advancement is apparent which is manifest in our pipeline of deals we have seen since the beginning of the pandemic,” she noted.

The steady clip of venture capital investments across Seattle, Portland, and Vancouver B.C. reflects what’s going on at a national level.

New Q3 numbers from the PitchBook-NVCA Venture Monitor show investors pouring more than $37 billion across 2,200-plus deals in the third quarter. Total capital raised was slightly higher compared to the year-ago quarter.

The third quarter marked a rebound from an initial slowdown when the COVID-19 pandemic began in the U.S. earlier this year. Fundraising by investors is also on pace to set a record yearly high, already exceeding 2019 numbers, while exit value reached the second-highest quarterly figure ever, PitchBook reported.

“It is amazing how busy everyone seems to be these days,” said Geoff Entress, a longtime Seattle-area investor and managing director at Pioneer Square Labs.

Entress said private companies might be the best risk investments right now as “cash pays nothing, treasuries and bonds are unattractive, and the stock market is hitting all-time highs.”

“Combine that relatively attractive long-term return potential with the large amount of money that has come into venture funds the last few years and it makes sense that there would be record dollars flowing into the category,” Entress added. “You are seeing it pretty much across the spectrum of private tech companies, all the way from seed to late-stage.”

The latest investment numbers and stock price surges from publicly-traded giants — including Seattle-area stalwarts Microsoft and Amazon — reflect confidence in the technology industry as millions of people rely on digital products and services for work and play amid the pandemic.

There were several large investments raised by Seattle-area companies in Q3, including:

There were also a flurry of other smaller deals from companies across a variety of industries, particularly in sectors such as enterprise software and healthcare that are surging amid the pandemic.

“We see brand new opportunities to build businesses in entirely new areas, in addition to companies working to improve the experience of today’s new working patterns,” said Hope Cochran, managing director at Madrona Venture Group. “And these companies can be built faster — which is a huge opportunity for founders and our region.”

McDonald said transitioning to virtual dealmaking was a big shift, but one that ended up positive overall with more investors attending Keiretsu’s meetings and ultimately funding companies.

In some ways, investing in a startup without meeting the founders in person can be a more efficient process, though there are pros and cons with the new format.

The ecosystem saw one startup go public in the third quarter, as Athira Pharma raised $204 million to help the biotech firm on its mission to treat Alzheimer’s and other diseases.

The number of first financings for U.S. startups reached a 10-year low nationally in Q3, showing some trepidation from investors with newer companies. At the same time, megadeals ($100 million or higher) are on the rise (223 through September) and will likely set a new record in 2020.

“While some of the decline at the seed stage may be a correction to excessive seed-stage activity several years ago, a more fundamental concern about the health of early investments remains,” PitchBook noted in its report.

Investment in female founders is below 2% of total VC right now. I really didn’t expect it to fall from 2018’s infamously low 2.2%… https://t.co/ytI6T1bwug pic.twitter.com/hupmeVEcDo

A Crunchbase report found that Black and Latinx founders raised 2.6% of all VC funding in the U.S. this year through August, or $2.3 billion. That follows a record of $4 billion in 2018.

Manny Medina, a Latinx founder and CEO of Outreach, a Seattle startup valued at $1.3 billion, said that investors are limiting their potential returns by not investing in ideas from a diversity of people.

“My advice for other founders from underrepresented groups is to use smaller rounds to your advantage, they will ultimately give you more flexibility,” he said in a statement. “Raising a huge early round is immaterial to your success if you listen to your customers and deliver a great product.”

Tune Therapeutics launches with $40M in funding, aims to fine-tune activity of genes in cells